Life on the Wrong Side of the Oil Field Tracks

Save Our Streams PA 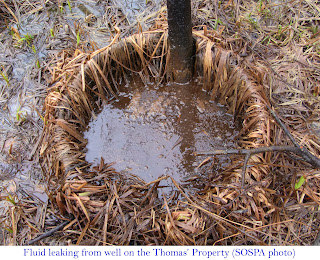 The industry can be broken down into two distinct groups, the old and the new.

While Gov.Tom Corbett promotes the successes of the new unconventional drilling industry during his re-election campaign, oil rises up from the shadows of the dilapidated pump-jacks, helping to shed light, revealing a long history of a dysfunctional  agency charged with the oversight of both the old and new style drilling.
Some operators who work in the oil and gas fields are conscientious; when they experience a spill or an equipment failure that results in oil ending up somewhere it shouldn’t be; it’s promptly cleaned up. That’s the best case scenario. 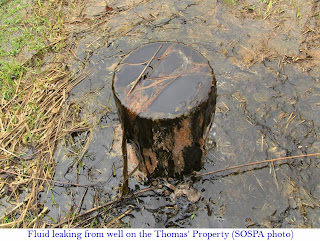 Imagine a worst-case scenario: an operator abandons a well and the unplugged well oozes oil and/or brine continuously; contaminating your property and nearby aquatic resources.
Now imagine that there are dozens, as many as 65 such wells, and then imagine gallons of oil and other contaminants pouring from the wells daily.
The Thomases of Duke Center,  McKean County don’t have to imagine this scenario. They have had to live it.

They have reached out to State and Federal officials for help to little avail. The scenario has plagued the Thomas’ lives daily; for decades. 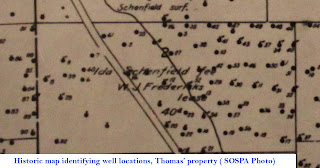 The Pennsylvania Department of Environmental Protection’s (PADEP) well records are incomplete.  It’s a mystery how many of the wells on the Thomas’ property were pumped by the operator who passed away in October of 2012. An even bigger mystery is; why Pennsylvania officials haven’t been able to figure out how to stop the constant flow of contamination from the wells, allowing the plumes of contamination to grow.
To date, after many reports have been made to the PADEP and the Environmental Protection Agency( EPA),  and also after several calls to the National Response Center to report some of the (daily) discharges of crude oil, a comprehensive survey of the oil field has yet to be conducted. Nobody knows exactly how many wells are on the Thomas’ property or even how many of these wells are contributing to the contamination plumes that cover large areas of the property. 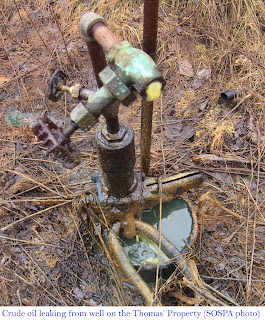 The Thomases have managed to locate over 30 wells in various stages of disrepair. A historic map, published prior to the permitting of 7 contemporary wells, identifies approximately 65 wells bringing some estimates to 72 wells but early oil and gas operators did not always document every well so there may be more wells hidden among the forested areas and heavily vegetated wetlands included in this 40 acre parcel.
There are health and safety hazards associated with these wells and these have essentially rendered the majority of the property unusable. While a number of wells have pump-jacks or well casings attached, others are simply open holes hidden among the underbrush of the forest canopy and wetland vegetation.

Pump-jacks sit idle on some of the wells; while emerald green crude flows from pipes and wellheads. In some areas the ground is completely saturated, puddles have formed and brine flows continuously across these areas to ultimately reach Knapp Creek, a tributary of the Alleghany River.
Broken pipes, tangled wires, leaking oil and brine tanks litter the oil field.
Large tanks surrounded by dark oil stains leak oil and other fluids while the unmistakable oil field odors and gases permeate the air. 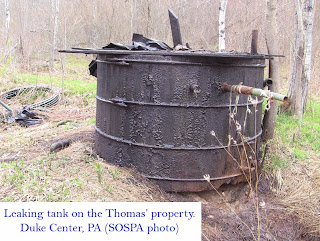 Many abandoned wells constantly pour natural gas into the atmosphere. Several of the wells on the Thomas’ land are leaking natural gas; contributing to climate change. While gases pour into the atmosphere, and as the contamination plume grows, PADEP officials and representatives for the deceased operator’s estate mull over how to divide the oil pie and draw straws to figure out who is going to take the first bite.

According to the National Response Center a report, dated March 06, 2013 “this has been an ongoing issue for years.” The oil and fluids continue to flow from wells situated in these wetlands, along the creek, in the creek and on the steep mountainside, where eventually it washes downstream while officials mull over what to do.
It seems the Department of Environmental Protection or any other agency of the Commonwealth will probably not be able to figure out how to appropriately address this. Contaminants are entering into the watershed daily, a fact that officials, from the local level including Rep. Martin Causer, and others on up to governor Corbett’s office have been made aware of, yet none seem to be able to grasp the idea that this needs their immediate attention, a remedy, sooner rather than later and some office, department, agency needs to step in and take the lead. Do something, anything to stop the contaminants from entering Pennsylvania and New York State waterways.
The idea that the agency continues to authorize more permits to drill wells; while existing abandoned and unplugged wells are continuously dumping contaminants directly into the watershed, as the alarmingly clueless buffoons try to figure out who’s on first, is simply astounding. When will the PA Department of Environmental Protection start actually, you know, protecting the environment? 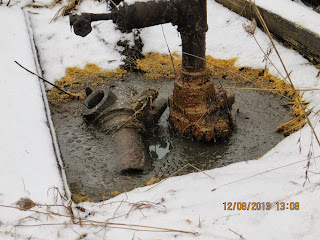 According to a recent press release, dated October 15, 2013 Reps. Martin Causer (R-Turtlepoint) and Kathy Rapp (R-Warren) joined hundreds of independent oil producers and supporters at the site of the world’s first oil well to highlight the challenges threatening the future of this 150-year-old industry.
Causer spoke to the crowd during the event.“Our independent oil and gas producers are vital contributors, not only to our local economy but to our statewide economy as well,” Causer said. “We can’t afford to have government regulate them out of business. It’s time for the administration to work with us to ensure the future of Penn Grade crude and all the business and industry it supports.” 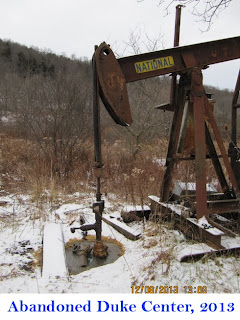 Rapp stated “I am proud to stand with all of you in the fight to not only protect this industry but to get government out of the way so it can grow and thrive,” Rapp continued “It’s time for the bureaucrats who write these regulations to be held accountable to the people.”

Ditto!  By the way Kathy, the Thomases are people too. 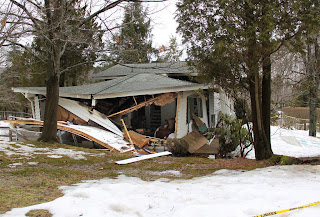 Improperly abandoned wells are known to provide  direct pathways to the aquifer and to the surface. The Thomas’ water well contains explosive levels of methane. Due to the risk of explosion a PADEP official's advice to the Thomases?
“I don't recommend you take a nice soak bath while smoking a cigar and enjoying a glass of wine."
XXXX


NRC Incident report number 1037045 dated 30-JAN-2013 10:35. “CALLER STATED THAT THERE WAS A DISCHARGE OF CRUDE OIL, METHANE GAS FROM A WELL HEAD AND INJECTION WELL, THE CAUSE IS DUE TO UNKNOWN REASONS.” Link: http://www.nrc.uscg.mil/reports/rwservlet?standard_web+inc_seq=1037045

NRC Incident report number 1065112 dated 07-NOV-2013 08:31. “CALLER IS REPORTING THAT MULTIPLE WELLS ARE LEAKING CRUDE OIL ONTO HER PROPERTY. CALLER STATED THIS IS DUE TO NEGLIGENCE ON THE PART OF THE OWNER OF THE WELLS.” Link: http://www.nrc.uscg.mil/reports/rwservlet?standard_web+inc_seq=1065112

Perilous Pathways: Behind The Staggering Number Of Abandoned Wells In Pennsylvania
http://stateimpact.npr.org/pennsylvania/2012/10/10/perilous-pathways-behind-the-staggering-number-of-abandoned-wells-in-pennsylvania/

Working to raise awareness and promote the plugging of lost, orphan and abandoned oil and gas wells.

Search Save Our Streams Blog